The ‘New Deal’ Comes to Palmer

The New Deal was a set of federal programs launched by President Franklin D. Roosevelt, after taking office in 1933, in response to the calamity of the Great Depression.

It had four major goals and achievements:

•Economic Recovery: The New Deal stabilized the banks and cleaned up the financial mess left over from the Stock Market crash of 1929.  It stabilized prices for industry and agriculture, and it aided bankrupt state and local governments.  And it injected a huge amount of federal spending to bolster aggregate incomes and demand.

•Job Creation: One in four Americans was out of work by 1933.  The New Deal created a number of special agencies that provided jobs for millions of workers and wages that provided for desperate families. It also recognized the rights of workers to organize in unions.

•Investment in Public Works:  The New Deal built hundreds of thousands of highways, bridges, hospitals, schools, theaters, libraries, city halls, homes, post offices, airports, and parks across America—most of which are still in use today.

•Civic Uplift:  The New Deal touched every state, city, and town, improving the lives of ordinary people and reshaping the public sphere.  New Dealers and the men and women who worked on New Deal programs believed they were not only serving their families and communities, but building the foundation for a great and caring society.

In less than a decade, the New Deal changed the face of America and laid the foundation for success in World War II and the prosperity of the postwar era – the greatest and fairest epoch in American history.

The New Deal, 1933-1943, inspired a civic, cultural, and economic renaissance. But the New Deal is fading from collective memory—a casualty of time, neglect, and politics. 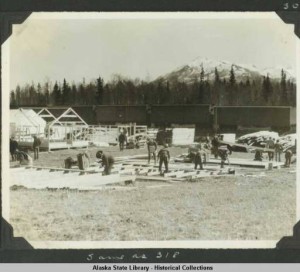 Matanuska Colony “Mug Book” – A photo album of Colonists, with names, places and family information.  Assembled and donated by Juster Hill -Writers, Directors and Producers of Alaska Far Away and Where the Matanuska River Flows

Building a Town:  – An introductory history of the transient workers of the Matanuska Valley Colony of 1935.

There are other New Deal Colonies around the United States –

This and more information can be found at National New Deal Preservation Association – learn more!